We here at Shrunk Collectibles believe this Luke Skywalker Jedi Knight Black Series figure from Hasbro epitomizes what SW is all about.

As far as we’re concerned, this Star Wars Black Series Jedi Knight Luke encapsulates what the whole science fiction franchise is all about.

This post, its photos and table include links to products on other websites. If you purchase something through these links we may earn a commission at no extra cost to you. 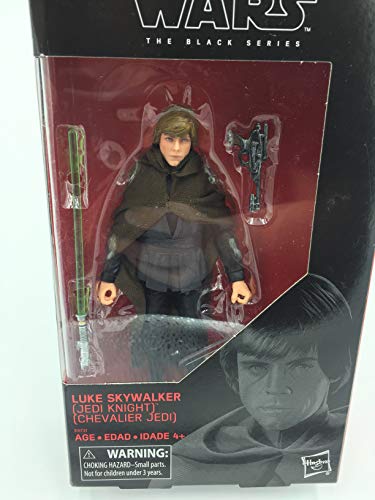 “Expensive but Well Worth It!”

Buy From Amazon
What We Like
Not So Good

That being said, apologies to the Clone Wars and Mandalorian fans.

After all, this Black Series Luke Jedi Knight is the kind of 6 inch action figure that screams nothing but classic SW.

We here at Shrunk Collectibles know damn well that we aren’t the only ones who get a bit nostalgic when we see toys based on the original trilogy.

The question is: should you be getting this Star Wars Black Series Luke Skywalker Jedi Knight toy to add to your collection.

Or is it just pure nostalgia fuel for all the SW feels that you’re longing for.

Especially now that it’s still unclear when we’ll be getting a new Star Wars movie.

Well, sit back and hold tight.

We’re about to give you the lowdown on everything you need to know about this Luke Skywalker Jedi Knight Black Series figure.

Spoiler alert, though: you’re probably going to love it as much as we did!

This Luke Skywalker Jedi Knight Black Series figure evokes a whole lot of memories from Return of the Jedi (got to love them Ewoks, people).

Not only that, but even the packaging has us yearning for a more innocent time in the Hasbro SW BS line.

Nowadays, the whole toy line is moving toward a flashier direction when it comes to their packaging.

What with the emergence of sub-lines like the BS Archives, those chromium variants, and everything in between.

That’s not something that this Star Wars Black Series Luke Skywalker Jedi Knight has.

Since this is an older release that employed the streamlined BS packaging: it’s black and red and amazing all over.

To be completely fair, though, this Star Wars Black Series Jedi Knight Luke—particularly its packaging—won’t be as cool then as it is now.

It’s all about the nostalgia factor, baby, and we’re not complaining!

As you’d expect from older SW BS toys from years past, this Black Series Luke Jedi Knight has a modest albeit highly displayable window box packaging.

In front of the box, you get everything that you can expect from the line.

It includes the SW logo, the red font, Luke’s name, and the version of the Jedi Knight Luke Skywalker Black Series you’re getting.

There are so many variations of the main protagonist of the original trilogy out there.

On the back of the box is some sweet character art and, of course, a short in-universe bio of the chosen one himself.

Think Outside the Box!

And that’s pretty much it, really; like we said, SW’s BS line’s packaging isn’t about getting flashy.

It’s a more streamlined kind of box that you can display should you choose to keep your toy in MISB condition.

However, keeping it in MISB would be a waste.

There is some nice stuff here that you can enjoy once you pop that box open.

Once you take out this Star Wars Black Series Jedi Knight Luke from its box, you’ll be treated to modest number of accessories.

It includes Luke’s green lightsaber from ROTJ; a blaster; and his knightly jedi robe.

This Black Series Luke Jedi Knight would have benefited from a couple more accessories.

But his black Jedi robe (it’s not the one you’d see Obi Wan Kenobi wearing) is one of those larger additions to the package.

So we completely understand why they had to make a few adjustments here and there.

We especially appreciate how nicely sculpted each and every little thing in this package is.

From the blaster to the head sculpt, the company really did justice in providing us fans with a toy worthy of the Star Wars galaxy.

And speaking of Star Wars products, this Luke Skywalker Jedi Knight Black Series figure might not be the most affordable option that you can get with right now.

But it’s definitely worth it.

For one, this has got to be one of those few times when Hasbro has gotten the likeness of Mark Hamill impeccably.

That makes this Luke Skywalker Jedi Knight Black Series figure one of the best representations of the actor in his jedi role.

If there’s a certain sequence within the ROTJ movie that this toy will make you reminiscent about, it’s the beginning of the film.

It’s where Luke infiltrate’s the Hutt boss’ palace to do give the crime lord some hot jedi action.

This Black Series Luke Jedi Knight is clad in an all-black tunic hidden under a dark brown robe.

That has since become one of the most iconic attires that the character has ever worn throughout the series.

It is perhaps only second to his original A New Hope costume.

The tunic on this Black Series Luke Jedi Knight is made purely of PVC, which is a pliable material as it is.

You can’t help but commend them for this.

Having said that, this Luke Skywalker Jedi Knight Black Series figure’s materials, particularly when it comes to that tunic piece, are top-notch.

It makes the toy one of the most articulated BS jedi figs out there.

Now, you’re probably worrying about articulation with the hood on, in which case don’t be: the robe accessory is made entirely of fabric.

This Star Wars Black Series Luke Skywalker Jedi Knight only has a couple of other accessories.

They include his blaster pistol and the trademark green lightsaber that Luke himself crafted in between Empire and ROTJ.

Starting with the lightsaber accessory, you’re not going to find this one to be any different from the one Obi Wan Kenobi has.

But if you thought that you’re getting ripped off by Hasbro here, then you definitely have another thing coming.

That’s because this Star Wars Black Series Luke Skywalker Jedi Knight is as faithful to canon as it gets.

Story of the Lightsaber

Without going too much into detail, Luke had to craft a new lightsaber when he lost his first one to Darth Vader.

That lightsaber incidentally was also the Sith lord’s original weapon way back when he was Anakin.

The blade of the saber is what you’d usually find on BS figs, by which we mean it’s a reasonably pliable but we don’t recommend bending it.

The hilt, however, is nicely detailed.

Both the sculpt and the paint job are done nicely, with little to no sloppy apps or unseemly shapes from the molding.

What really surprised us here at Shrunk Collectibles, though, is the blaster pistol on this Star Wars Black Series Jedi Knight Luke.

Keeping true to providing fans with as much accuracy to their onscreen appearances as possible, the company makes sure that you’re getting accurate stuff with these things.

And it isn’t just the ones that you can see on other figs like Han Solo or any random stormtrooper.

This one is more akin to the one that a Mandalorian warrior would use in battle.

It’s also slightly larger than the regular blaster pistol that we usually see from other SW BS releases, which is nice.

It makes this Luke Skywalker Jedi Knight Black Series figure stand out even more from the pack.

There’s not much in the way of paint apps, though, since this is all done in gun metal gray (again, as it should).

However, you are definitely going to find that the sculpt on this blaster pistol is amazing.

It’s a step above all the other types of blasters you’ll see in the SW BS line, so kudos to the manufacturer for making it so!

When it comes to this toy’s articulation, we can’t find anything that will have you complaining.

It’s one of the most poseable and displayable SW BS toys that we’ve seen.

We’d even go so far as to say it’s one of the most nicely articulated SW BS toys to have ever come out.

That’s all thanks to how the character is designed.

There aren’t a lot of blocky or angular shapes in Luke’s overall character design that can hinder the toy’s articulation.

Moreover, Hasbro did a great job in incorporating and applying the materials they used to make this toy as poseable as possible.

First off, you’ll find that this particular fig makes use of SW BS’ popular double-jointed knees and elbows.

That makes sure that you get more posing opportunities when you display it.

The head sculpt is on a ball joint that can swivel a full 360 degrees.

Thankfully, Luke’s design doesn’t require any additional material like hair that can otherwise hinder how you move his head.

The shoulders and thighs on this thing are on all ball joints, so you get full 360 degrees of articulation here.

However, keep in mind that the thigh joint is just slightly hindered by Luke’s backside, so you really can’t (and shouldn’t) go for totally awkward poses.

Then again, these are ball joint we’re talking about: they’re pretty sturdy, which is another thing we love about these SW BS figs.

The hands on this Luke toy are on swivels, and so are his feet. All in all, you’re getting a whole lot of articulation here.

The only small gripe we have is that the tunic, as thin and pliable as it is, can still make the torso joint on this toy slightly hindered.

But it’s definitely workable and nothing that you can really complain about.

This Luke Skywalker Jedi Knight Black Series figure is based on the jedi knight’s appearance during the beginning of Return of the Jedi.

In between Empire Strikes Back and ROTJ, Luke has become a bona fide jedi knight.

He has tasked himself with rescuing Han Solo from Jabba the Hutt, one of the most powerful crime lords in the Hutt Cartel and the Outer Rim.

As opposed to Luke’s A New Hope costume, fans can notice the transition from lighter shades to a darker tone.

It shows how the character has matured into a more serious figure within the Star Wars galaxy.

This costume, in fact, is what he primarily wore throughout the movie, particularly without the robe.

Since it first graced movie screens in the 80s, this jedi knight costume has become quite iconic within SW fans all over the world.

Hasbro is the largest toy company today, with licenses to produce novelties and collectibles based on some of the world’s most popular franchises.

These include: Star Wars, My Little Pony, and Transformers, just to name a few.

It features nice details and a bevy of releases all in affordable prices.

This line has become the best budget option for people who want to get in on the SW toy game while balancing quality and affordability.

From characters like Yoda to Han Solo and even to random stormtrooper sergeants, there’s something for every SW fan within the BS line.

Yes, this is admittedly not the most affordable SW BS toy out right now, but it’s definitely worth the price you’re paying for.

It’s nicely detailed, highly poseable, and absolutely screen accurate: a trifecta that not all SW BS figs can claim to have.

Plus, we can’t rave enough about the how they implemented the materials here!

That said, this Luke Skywalker Jedi Knight Black Series figure is a definite must-have for any SW fan who wants an iconic character in an iconic costume!